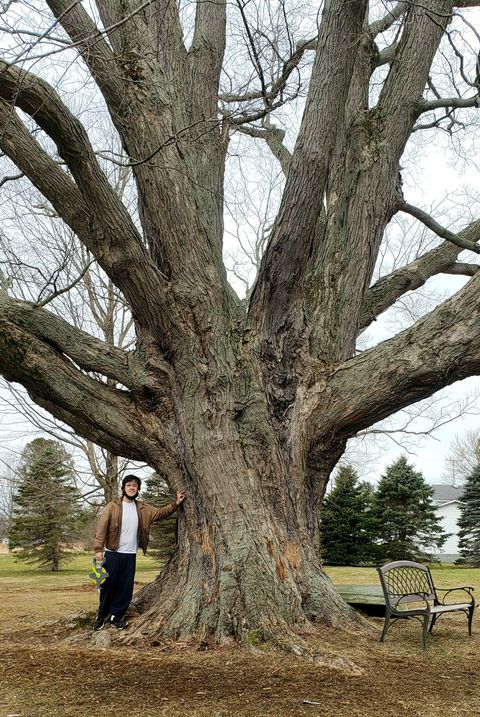 Imagine taking an early morning walk along a river bank, listening to the water rush by, the birds serenading the morning. The peacefulness of the moment washes over you. Along your walk image coming across the path of a tree so massive and monumental that you stand in reverence and wonder. How long the tree has stood? What part in history has the tree has played? How many generations have stood in that very spot and gazed up in wonder at the beauty of the crown that the tree wears so magnificently?

100 years ago finding an large tree was a pretty typical occurrence. In the last century, however, many of these trees have been felled to clear the land for farming or for the lumber industry. They can still be found in Ohio though. These mammoth trees measuring over 200″ in circumference are living testaments to the grandeur of Mother Nature. To get this large, trees are often a century or more in age. Being in the presence of a “monster tree, you definitely feel — I feel — a connection around them,” says Big Trees Ohio founder, Marc DeWerth. The organization is looking to find and document ‘monster’ trees.  DeWerth says it is their goal to “make people more aware of Ohio’s abundance of MONSTER sized trees, and to encourage folks to take the necessary steps to preserve them for many generations to come.”

This group of approximately 20 volunteers have documented over 1000 trees that were not readily known in the state. According to DeWerth, “over a dozen new State Champions have been found as well as four new National Champions.” Are you aware of a ‘Big Tree’ in Ohio? Eligible trees would have a 200 inch circumference or greater. Send your nominations to the Big Trees Ohio group on Facebook or email at bigtreesohio@gmail.com.